The 2010 Fifa World Cup is done, congratulations for everybody in Spain. Spain deserved to win the 2010 Fifa World Cup, the beautiful game they present during the last 30 days was incredible. Spain won the World Cup for the first time in its history and for sure it is very special for them, the picture below demonstrate that, the party will continue all day long. I think this Monday will be a holiday in Spain 🙂 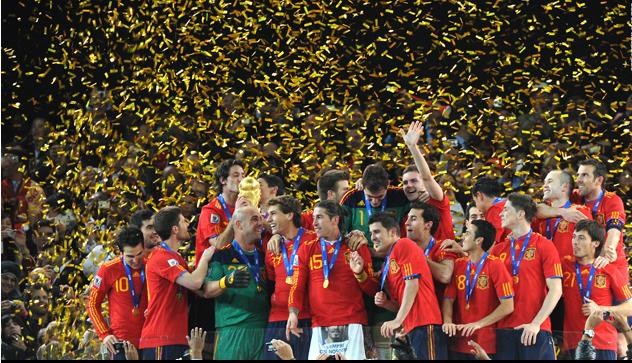 Now we have to wait 4 years for the next world cup which will take place in Brazil in 2014 🙂 and Brazil has the responsibility to win, the last World Cup in Brazil was in 1954 and we fail at the final game for Uruguay, but after that we won the World Cup 5 times :).

FIFA revealed the logo design for the next world cup. The logo is a representation of the World Cup trophy formed by three linked hands in the national colors of Brazil, yellow and green with the year of the tournament appearing in a bright red hand-drawn typeface.

Here’s the video to go with the official launch of the logo:

Historical day for Brazil, the 2016 Olympic Games will be in Rio de Janeiro